At a keynote today at Google I/O ,  Google came out swinging against its competitor Apple and announced Google TV. again. Google TV is a new experience made for television that combines the TV you know and love with the freedom and power of the Internet. Watch an overview video below, sign up for updates, and learn more about how to develop for Google TV.

Google has partnered with Sony and Logitech to provide TVs and Blu-ray players with Google TV built in. Logitech will have a companion box. Intel will be powering all the devices with the Atom processor.  Google says Video should be consumed on the biggest, best, and brightest screen in your house And while they’re not the first to attempt this, Google thinks they can get it right. There are four things they’re focusing on: 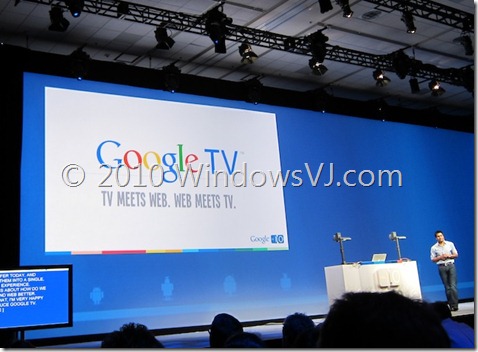 Google TV is built on Android 2.1 which will be upgraded later. It runs Google Chrome for the browser and has Flash (10.1).  And since Google TV is Android-powered, Android apps will work on the TV too.