Google Chrome has been catching up pretty fast in the war of browsers. Since its first release in Q4 of 2008, it has released 4 Major versions of the browser and is all set for Release version 5, with beta being released. Firefox a competitor from over 5 years is still has its most stable version as 3.6, which clearly depicts how fast Google is running. But they are not very sure what is a major release, instead of having subversion of Chrome they release it as next Version.

A few days ago Google updated their chrome version to stable 4.0 to version 5 beta.The noticeable change is the java script performance which is getting the results very fast, making it a must have browser for websites with javascript functionalities (which includes their own set of products Orkut, Gmail etc). 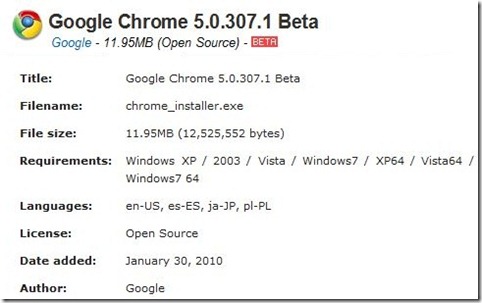 For information about alpha and developer builds, check out the Chrome dev channel here.

6 thoughts on “Here comes yet another Chrome Version, Chrome 5 Beta”