While penning down few of the innovations and future projects by Microsoft at the Microsoft India Development Centre, Hyderabad during MVP Open day I was astonished by one of the vision Microsoft had. The vision of Digital Payment system which visualized payment to different merchant & services using a mobile device. You may flicker amongst all your e-cards to select one to make payment from.

A few days later, as per on Google Blog, Google gave a demo of Google Wallet, an app that will make your phone your wallet along with Citi, MasterCard, First Data and Sprint at the New York City office of Google.

Google Wallet users can tap, pay and save using their phone and near field communication (NFC). NFC is a technology which has been in buzz since almost seven years. Google had been testing Google Wallet and plans to release it soon.

Google Wallet is aimed at making it easier for customers to pay for and save on the goods, while giving merchants more ways to offer coupons and loyalty programs to customers, as well as bridging the gap between online and offline commerce.

Because Google Wallet is a mobile app, it will do more than a regular wallet ever could. You’ll be able to store your credit cards, offers, loyalty cards and gift cards, but without the bulk. When you tap to pay, your phone will also automatically redeem offers and earn loyalty points for you. Someday, even things like boarding passes, tickets, ID and keys could be stored in Google Wallet. 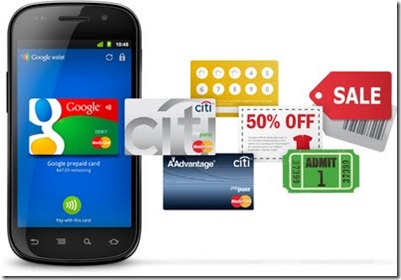 Initially Google Wallet will support both Citi MasterCard and a Google Prepaid. Consumers will be able to tap their phone to pay wherever MasterCard PayPass is accepted. Google Wallet will also sync Google Offers, which can be redeemed via NFC at participating SingleTap merchants, or by showing the barcode as you check out. In the beginning, Google Wallet will be compatible with Nexus S 4G by Google, available on Sprint.

This is just a start to what Microsoft visualized many months ago and now has already been a great adventure towards the future of mobile shopping. Google instead of creating fancy videos brought this to consumers. I hope Microsoft will be learning from this. The concept was shown in the video titled MSFT Vision 2019.. and Google brought it in 2011. All I can say is “Vision of Microsoft… Profits of Google”.